Have had the honour of evolving and expanding the VIKALP digital app for women safety. It allows women unprecedented access to police help.

Women are often reluctant to go to police stations, or at times do not even have the freedom of doing so, specially in cases where gender-based violence is  perpetrated by family members.

The Solution and the Process

“VIKALP” is an online portal exclusively for women, where women themselves, or anyone on their behalf, can register complaints easily and with utmost safety from anywhere in the State of Uttar Pradesh.

It thus provides an alternative, protected, direct and highly user-friendly interface between the citizens and their local police on issues related to crime against women.

The portal leverages ICT for the digital inclusion of women and has all the ingredients of SMART Policing.

As soon as a complaint is uploaded, an SMS is generated for the supervisory officers of the district police concerned as well as for the Mahila Samman Prakoshth (MSP).

Every complaint gets digitally recorded and the complainant is given a digital acknowledgement in the form of a unique Complaint ID with which she/he can see the progress in the case. The local police has to take action on each and every complaint and upload the Action Taken Report (ATR) on VIKALP within 24 hours. A nodal officer has been appointed in each district who makes sure that the police response is fast and efficient. Further, the MSP also monitors this portal on a day to day basis and keeps directing local police if cases are still pending or not being dealt satisfactorily.

Most importantly, every complainant has the option of rating police action as “SATISFIED” or “DISSATISFIED.” As long as complainants express dissatisfaction with police response, the loop remains open and MSP pursues the matter with the SP and the nodal officer concerned, after legally vetting these cases. Calls are also made to the complainants to ensure customer satisfaction.

The process goes on until the complainant is fully satisfied with the police action thereby giving women the power to hold the Police accountable and get 100% response from them.

“VIKALP” is thus geared to guarantee total customer (public) satisfaction and quality policing, and has contributed in bridging the trust-deficit between police and civil society to a praiseworthy extent while ensuring the well-being of the targeted population that we are meant to serve.

A gazetted officer has been designated as a nodal officer in each of the 75 districts of the State who attends to the complaints urgently, ensuring a police response within 24 hours.

None, as it has been set-up and is functioning with resources already existing

In order to provide the facility of  VIKALP as an ICT tool in the hands of all complainants approaching the office of  the MSP as well as a part of the organization’s efforts at promoting digital literacy, an E-cell has been established here, with a dedicated and sensitive staff  which is helping the complainants to upload their complaint on the portal. 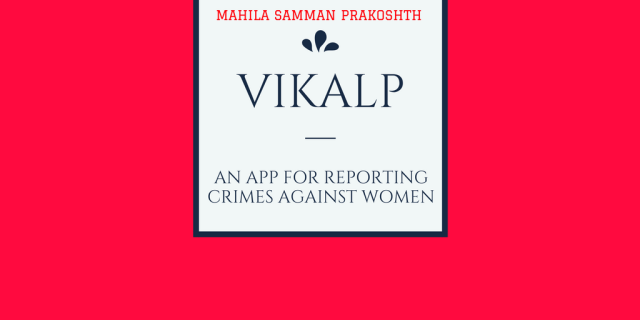 The performance of the Vikalp portal has won accolades from all quarters including the Security Watch India’s “Innovative Use of Technology for Women Safety” Award, 2016 and the Manthan Award (South Asia) for Inclusion and Empowerment by the Digital Empowerment Foundation (DEF).

It has also been endorsed and recommended by the Bureau of Police Research and Development (BPR&D) under the Ministry of Home Affairs (MHA) for adoption by the various States and Union Territories as a good practice in Women’s Security.